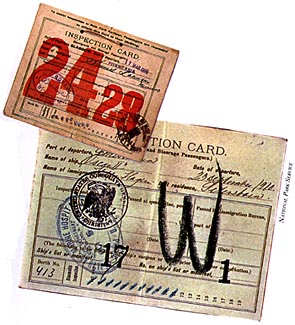 When they landed, the immigrants had numbered tags pinned to their clothes which indicated the manifest page and line number on which their names appeared. These numbers were later used by immigration inspectors to cross- reference immigrants about their right to land. Anne Vida, a Hungarian immigrant in 1921 , comically remembers the sight: "We had all sorts of tags on us .... We must have looked like marked-down merchandise at Gimbels basement store or something." Though relatively few immigrants who landed at Ellis Island were denied entry, the two percent that were excluded often equaled over a thousand people a month during peak immigration years. The Ellis Island processing station was meant to channel and filter the seemingly endless supply of human energy that came to fuel America's burgeoning economy, and everywhere on the island there was an air of purpose. Greeted with pointing fingers and unintelligible commands, the new arrivals formed a line which stretched from the Ellis Island dock into the Baggage Room of the Main Building, winding its way up to the second floor where the immigrants were met by a team of doctors and inspectors who would decide which way the Golden Door would swing. Jostling three abreast, the immigrants made their way up the steep flight of stairs and into the great hall of the Registry Room. Although many did not know it, the inspection process had already begun. Scanning the moving line for signs of illness, Public Health Service doctors looked to see if anyone wheezed, coughed, shuffled, or limped as they climbed the steep ascent. Children were asked their name to make sure they weren't deaf or dumb, and those that looked over two-years-old were taken from their mothers' arms and made to walk. As the line moved forward, doctors had only a few seconds to examine each immigrant, checking for sixty symptoms, from anemia to varicose veins, which might indicate a wide variety of diseases, disabilities, and physical conditions. Of primary concern were cholera, favus (scalp and nail fungus), insanity, and mental impairments. In 1907, legislation further barred immigrants suffering from tuberculosis, epilepsy, and the physically disabled. The disease which resulted in the most exclusions, however, was trachoma, a highly contagious eye infection that could cause blindness and death. At the time, the disease was common in Southern and Eastern Europe, but relatively unknown in the U. S. (A Japanese immigrant later discovered the cure.) Physicians checked for trachoma by turning the eyelid inside out with their fingers, a hair-pin, or a button-hook to look for inflammations on the inner eyelid-a short but extremely painful experience. The "buttonhook men" were the most dreaded officials on Ellis Island. During line inspection, those immigrants who appeared sick or were suffering from a contagious disease were marked with blue chalk and detained for further medical examination. The sick were taken to Ellis Island Hospital for observation and care, and once recovered, could proceed with their legal inspection. Those with incurable or disabling ailments, however, were excluded and returned to their port of departure at the expense of the steamship line on which they arrived. In an attempt to discourage steamship companies from transporting ill, disabled, or impoverished passengers, an immigration law of 1903 imposed a hundred dollar fine for every excluded passenger. Medical inspectors developed a letter code to indicate further examination, and roughly every two out of ten immigrants received mystifying chalk marks. This alphabet of ailments ranged from Pg for pregnant to K for hernia and Ft for feet. Those suspected of having feeble minds were chalked with an X, and along with those marked for physical ailments, about nine out of every hundred immigrants were detained for mental examination and further questioning. Usually this consisted of standard intelligence tests in which immigrants were asked to solve simple arithmetic problems, count backwards from twenty, or complete a puzzle. In an attempt to deal with immigrants' cultural differences, Ellis Island's doctors developed their own tests which allowed them to base their decision on problem solving, behavior, attitude, and the immigrant's ability to acquire knowledge. Requiring immigrants to copy geometric shapes, for instance, was only useful for testing those who had some schooling and were used to holding a pencil. Favored were comparisons and mimicry tests which did not have to be explained by an interpreter, nor did an immigrant have to know how to read and write to solve them. After passing the line inspection immigrants were waved toward the main part of the Registry Room. There they entered a maze of open passage ways and metal railings which divided entire floor. As crowded as a country town on market day, the great hall was "a place of Babel" where all languages of the world seemed to cry out at once.

At the far end of the Registry Hall the legal inspectors stood behind tall desks, assisted by interpreters fluent in major languages and any number of obscure dialects. Although the interrogation that immigrants were to face lasted only a matter of minutes, it took an average of five hours to pass through the inspection process at Ellis Island. Wearing starched collars and heavy serge jackets, the inspectors verified the twenty-nine bits of information already contained on the manifest sheet. Family names were recorded with care, especially if they were spelled Andrjuljawierjus, Grzyszczyszn, or Zoutsoghianopoulos. Firing questions at the immigrants, the inspector asked them their age, occupation, marital status, and destination in an attempt to determine their social, economic, and moral fitness. Influenced by American welfare agencies that claimed to be overwhelmed by requests for aid from impoverished immigrants, the exclusion of those "liable to become a public charge" became a cornerstone of immigration policy as early as 1882. The Alien Contract Labor Law of 1885 also excluded all immigrants who took a job in exchange for passage. Together these laws presented the immigrant with a delicate task of convincing the legal inspectors that they were strong, intelligent, and resourceful enough to find work easily, without admitting that a relative had a job waiting for them. In 1917 anti-immigration force succeeded in pressuring the government to impose a literacy test as a further means of restricting immigration. The law required all immigrants sixteen years or older to read a forty-word passage in their native language. Those from the Punjab district of Afghans, for instance, had to follow a series of printed commands, such as picking up a pencil and handing it the immigration inspectors. Most immigrants, however, had to read biblical translations such as "Your riches are corrupted, and your garments moth eaten. Your gold and silver is cankered; and the rust of them shall be a witness against you, and shall eat your flesh as it were fire" James 5:2,3), which was the requisite passage for Serbians. Working from 9am-7pm, seven days a week, each inspector questioned four hundred to five hundred immigrants a day. Those who failed to prove they were "clearly and beyond a doubt entitled to land" were detained for a hearing before the Board of Special Inquiry. As immigrants did not have a legal right to enter the U. S., there could be no lawyer present at this hearing, but friends and relatives could testify on an immigrant's behalf. The Board reviewed about seventy thousand cases a year, admitting five out of every six detainees. Those rejected could appeal the decision directly to the Secretary of Commerce and Labor in Washington, D. C. At this stage immigrants could hire a lawyer or offer a bond guaranteeing they would not become a public charity.

Along with medical detentions and immigrants facing a hearing from the Board, unescorted women and children were detained until their safety was assured through the arrival of a telegram, letter, or a prepaid ticket from a waiting relative. Furthermore, immigration officials refused to send single women into the streets alone, nor could they leave with a man not related to them. Fiancees, reunited with their intended husbands, often married on the spot. During peak immigration years, detentions at Ellis Island ran as high as twenty percent-thousands of immigrants a day. A detainee's stay could last days or even weeks, and accommodations were in constant shortage. From 1900-1908 dormitories consisted of two long, narrow rooms which ran along either side of the Registry Room mezzanine. Each room slept three hundred people in triple-tiered bunks (much like steerage) that could be raised, converting the rooms into daytime waiting areas. In 1906 Commissioner Robert Watchom seriously considered hiring barges to serve as extra detention space until an appropriation of $400,000 from Congress allowed him to begin construction of the new Baggage and Dormitory Building. However, this facility was not completed until 1910. In 1907, Ellis Island's peak immigration year, 195,540 people were detained. After inspection, immigrants descended from the Registry down the "Stairs of Separation," so called because they marked the parting of the way for many family and friends with different destinations. Immigrants were directed toward the railroad ticket office and trains to points west, or to the island's hospital and detention rooms. Those immigrants bound for Manhattan met their relatives at the "kissing post," where many joyous and tearful reunions occurred.

Katherine Beychok, a Russian Jewish immigrant in 1910, remembers, "I saw a man coming forward and he was so beautiful I didn't know he was my father .... Later on I realized why he looked so familiar to me. He looked exactly like I did .... But that's when I met him for the first time. And I fell in love with him and he with me." The crush of immigration constantly tested the limits of Ellis Island's facilities, and over the years a constant appeal for more funds could be heard from the Station's commissioners. Ellis Island's 125-bed hospital opened in March of 1902, and expanded in 1907 and again in 1910. Although these additions brought the hospital's capacity to 275, patients diagnosed with illness that warranted their detention and hospital care often numbered over five hundred at a time. Many times immigrants with infectious diseases such as measles and diphtheria had to be cared for at city hospitals in Manhattan and Brooklyn. This prompted the United States Public Health Service to build a 450-bed contagious disease ward at the Ellis Island Station-creating a third contiguous island-as well as a psychopathic ward and a morgue. "The Island is at once a maternity ward and an insane asylum," remarked one doctor. By 1911 more than fifteen buildings at Ellis Island were devoted to medical care. Forty doctors, proficient in dealing with illness ranging from slight injuries to rare tropical diseases, staffed its hospital. During its half-century of operation over 3,500 immigrants died at Ellis Island (including 1,400 children) and over 350 babies were born. There were also three suicides. While the 700 doctors, nurses, inspectors, interpreters, matrons, stenographers, and other staff employed during the station's peak years generally followed Commissioner William Williams' directive to treat immigrants with "kindness and consideration," the process of inspection and detention-and the frightening prospect of exclusion-remained overwhelming.